How We Got 0 Million Impressions

Companies will do anything to get just one story or press release to go viral...

Through trial and error, we discovered a formula to creating viral press releases using data. Once we found this viral marketing formula, it wasn’t a matter of if a story was going to go viral -- it was a matter of when.

The case studies featured in this document went legitimately viral, generating hundreds of millions of pageviews. This PR playbook can be used not only for tech startups, but for many other industries, as well. What follows is a concise but comprehensive guide on “How to Use Storytelling with Big Data To Generate Viral Press Releases.”

1 Come up with a controversial or interesting topic. Create a taboo hypothesis that relates to your product or industry, usually done through a company-wide brainstorm. Example: “Do blondes really have more fun?”

2 Crunch the data. If there isn’t enough data or it’s just not possible to crunch, survey your users or use using Google Survey to get the necessary results. Example: To calculate if blondes have more fun online, all we needed to do was calculate how often women got liked vs. skipped in our app, based on their hair color.

3 Create a catchy title. Find the most interesting or controversial result—something attention-grabbing—and highlight that in the title. Example: Blondes have 28 percent more fun online.

4 Create a fun visual. Create a well-designed visual presentation or infographic of the data.

5 Reproduce the story for a different demographic. After the initial story is successful, reproduce the same story, but feature a more granular level, such as specific location (country, city, state), age range (millennials vs. baby boomers) or interest group (Android vs. iPhone users) to create numerous viral stories around one concept. Example: For the hair color story, we broke the results out further by every state and then by city, age range, and gender.

The next four subsections include some of our best examples of viral storytelling with data. Each of these stories led to massive media coverage and tens of thousands of new signups, while keeping our brand front and center in users’ minds.

Our First Hit: Do Blondes Really Have More Fun (Online)?

As Seen In: Glamour Magazine, The Telegraph, SheKnows.com

Apparently, they do—at least that’s what our research showed us. Many of the best ideas for data stories came from the women in the company, and doing a data story on hair color was one of the very best they came up with. By analyzing the like rates based on women’s hair color, we discovered that blonde women get 28 percent more matches than women with other hair colors. That number seemed awfully high to most people who read the article (probably all the non-blondes), but the data was there to back it up.

Although providing data to prove or disprove a commonly held stereotype (such as blondes having more fun) was usually sufficient to generate substantial interest in the story, frequently the data would uncover surprising results, which could add even more value. So, we ran the same hair color data on men, and sure enough, the data revealed that being bald wasn’t a detriment at all, because bald men received 5 percent more matches than the average male.

The viral response we got from this story gave us the secret sauce for our recipe for storytelling (the five-step process outlined above. We went on to leverage this story by adding in several new geographic angles as well. In this case, we broke it down by city, which led to localized press all over the country. 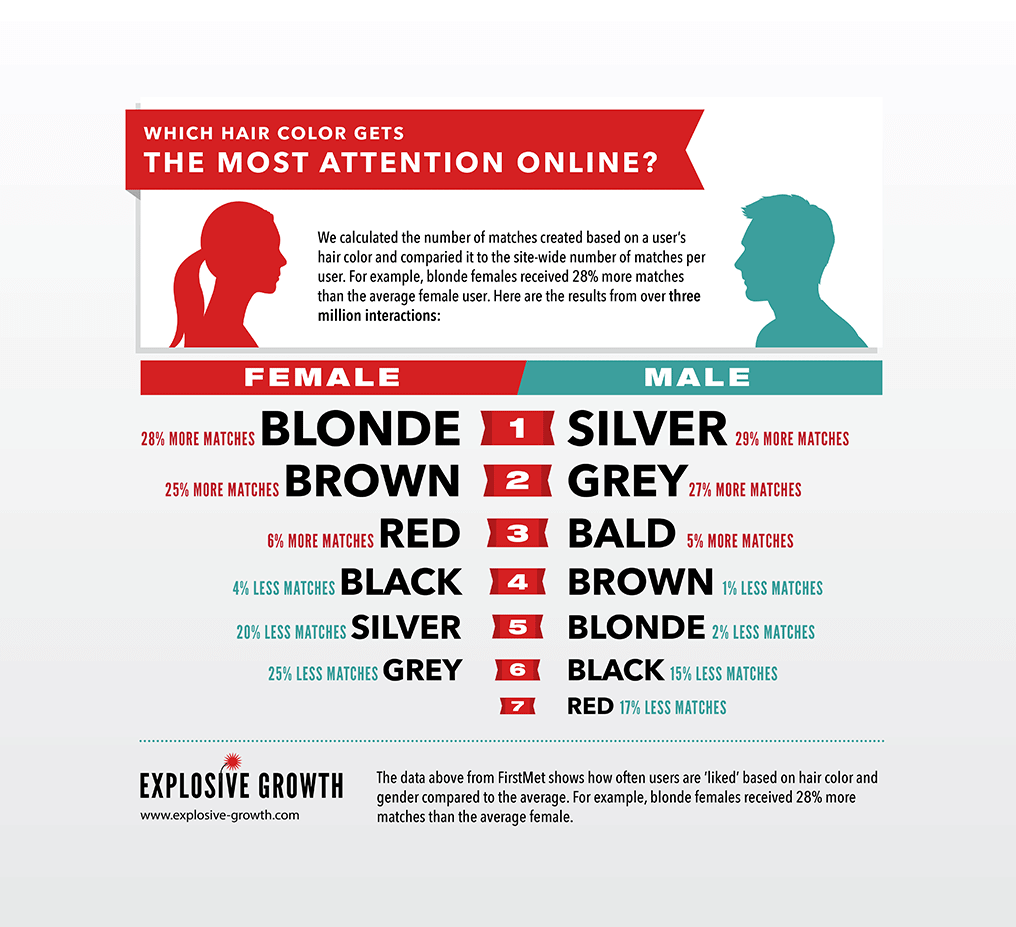 A Picture Is Worth 1,000 Words: What Does Your Online Dating Picture Say About You? 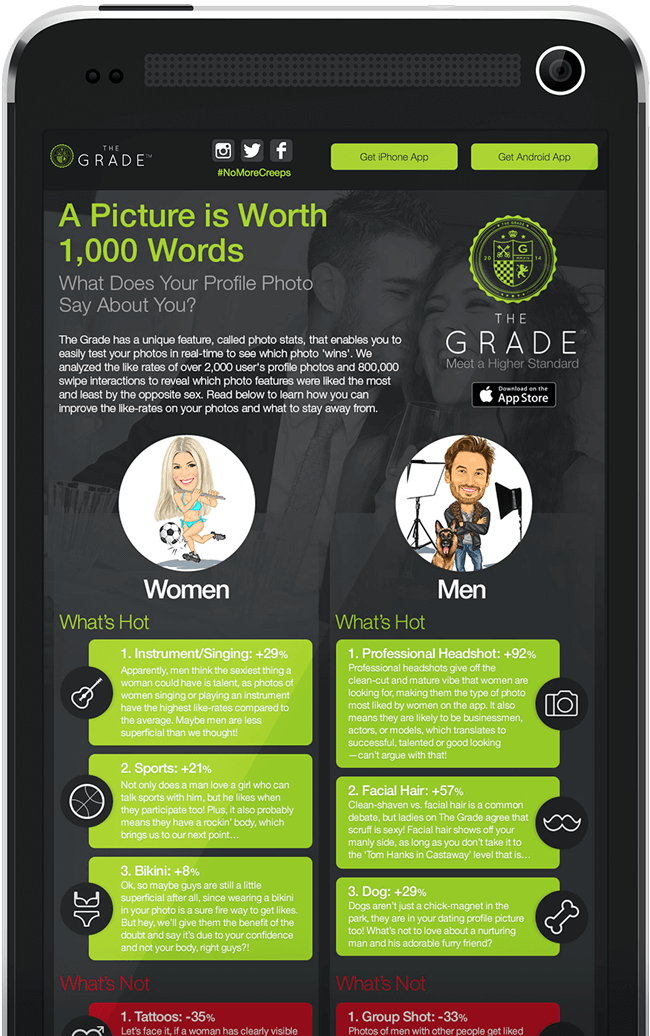 We went through tens of thousands of photos and categorized them (travel, playing sports, playing an instrument, with a pet, etc.), and compared each photo’s performance to the user’s average photo “like” rate.

We poignantly titled it, “What Does Your Photo Say About You?”

The data showed us some interesting facts that users loved, and the story went viral immediately. We were proving that if users took time to take interesting photos that showed off their personalities, they would get much better matches in return, and they didn’t need to be Brad Pitt or Scarlett Johansson.

One of the more polarizing photo categories was pictures that included dogs. Men who posed with a dog in their profile picture were seen as nurturing, (which women evidently found endearing) and received a 29 percent increase in likes. Conversely, if a woman posed with a dog in her profile picture, men viewed it as a distraction. They extrapolated that women would see them as second fiddle to their fur baby, wouldn’t give them the attention they desired, and would end the date at a “reasonable” time with little chance for extracurricular activities. Way to go guys. Not only are a lot of us creeps, but we’re also hopelessly needy—a dog in a female user’s profile pic resulted in a 19 percent decrease in likes.

This story seemed to really strike a chord with a lot of users, because people were always uploading new photos. So, it was interesting for them to discover what constituted a good photo for an online dating profile. Many people—correctly or not—view a swiping dating app as a contest of who the hottest user is. I think this data story, however, proves that interesting can still do very well.

Contrary to popular belief, I guess we do think about more than just sex when we’re looking at women. Of course, the third one is a bikini shot (sigh), so we won’t take too much credit for this revelation, but still, two out of three isn’t bad, right?

Our data told us that everyone likes money and women prefer taller guys. Neither one of those statements were going to win us any accolades for a revolutionary discovery. However, both stories went viral because we were able to quantify the results and interpret them in an entertaining way. For example, every additional inch in height increased a guy’s attractiveness, until 6’8”. The key takeaway was that a man who is 6’2’’ is 57 percent more likely to be contacted than a man who is under 5’5”. 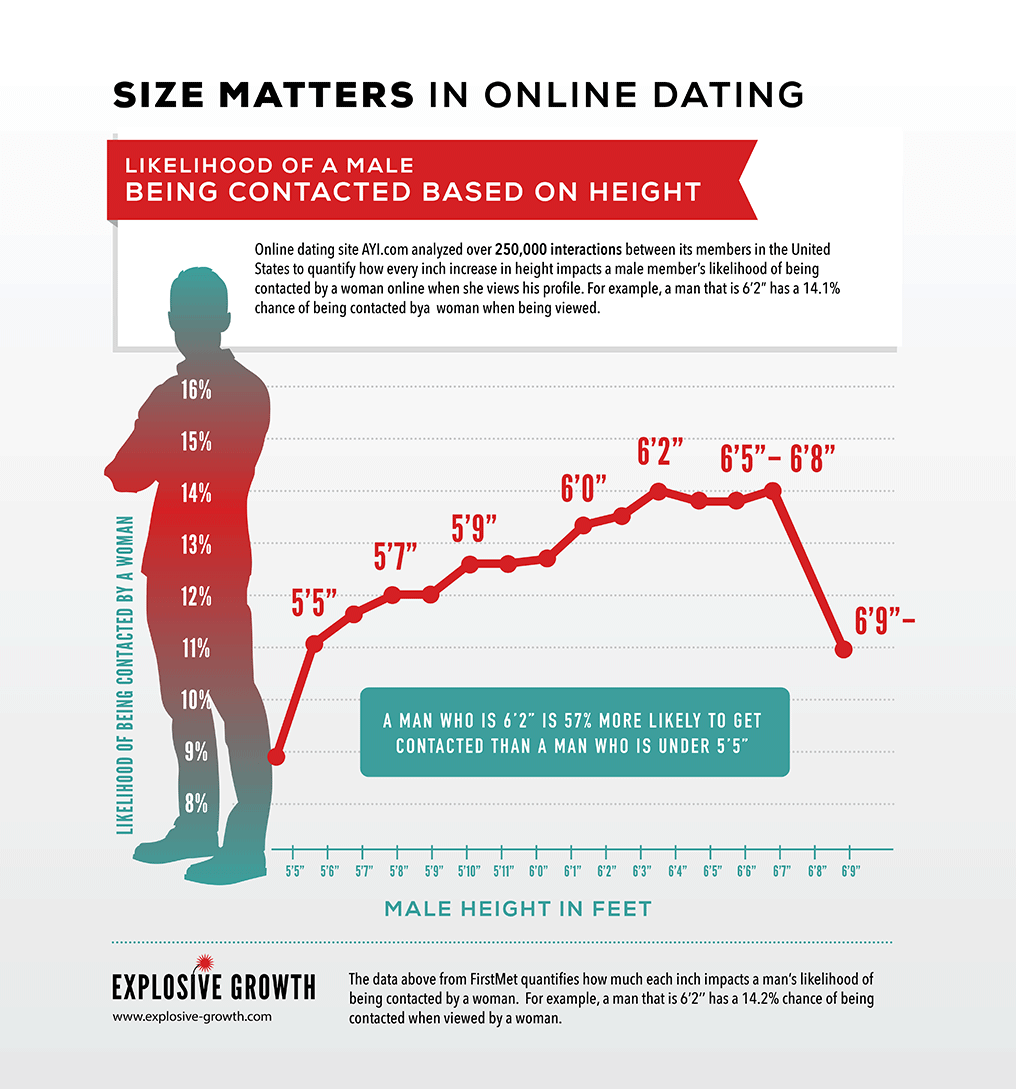 How Hot is Your Name? 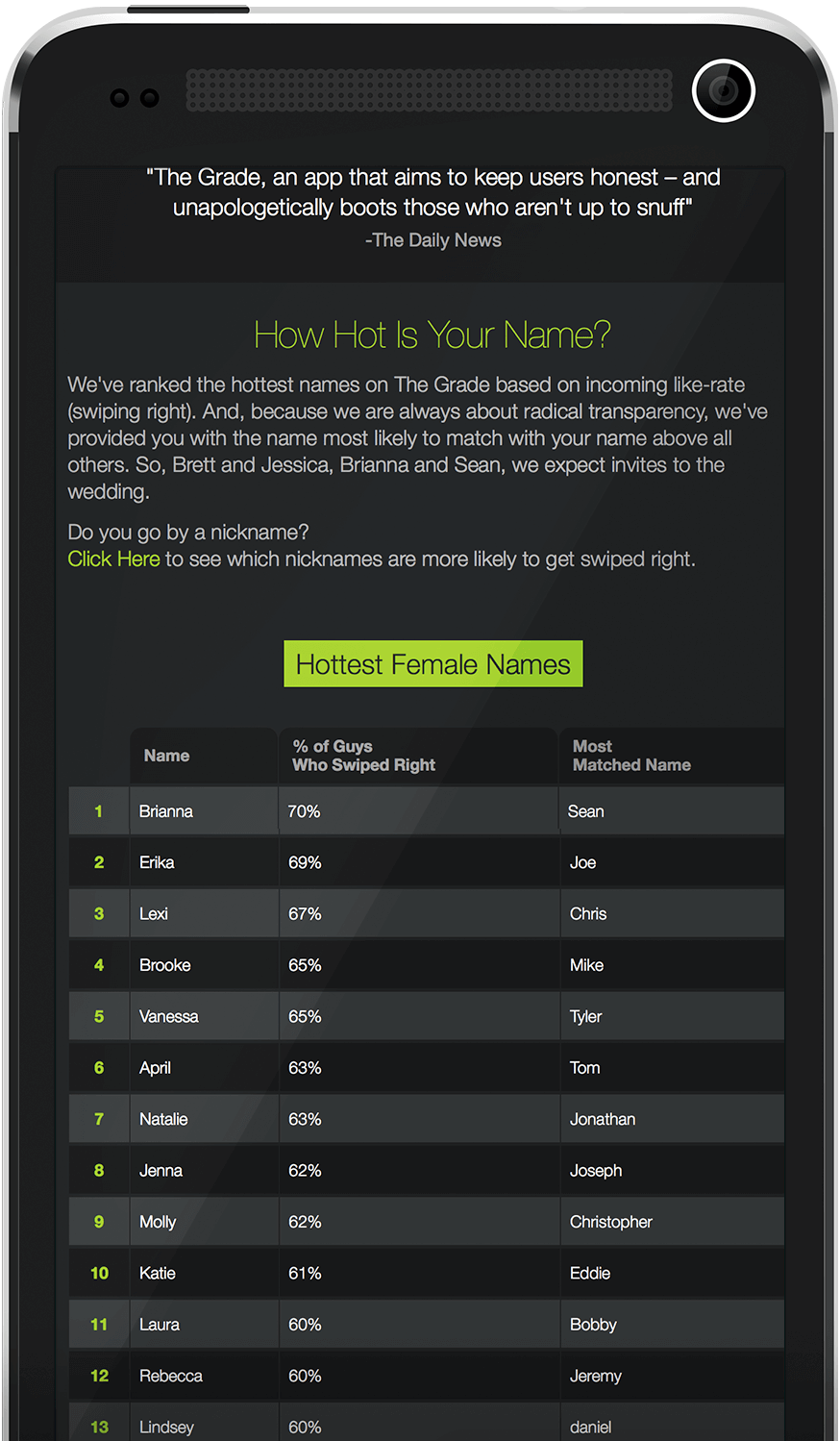 I became obsessed with knowing what factors made a data story go viral. It became very clear it had nothing to do with random occurrences or luck. More research was needed, and that’s when I found a book called, Contagious: Why Things Catch On by Jonah Berger.

The book provides a thorough explanation of why stories go viral by analyzing numerous stories and attributing their success to a breakdown of six principles. That book really influenced me—I figured out how I could apply those six principles to almost anything and get a story to go viral—which is exactly how I approached the next data story about names.

A friend of mine tried to set me up on a date with a girl named Alexis. I politely asked, “Cool, does she go by Lexi or Alexis?” She replied, “Oh, she actually prefers Lexi.” I said, “Great!” A little surprised by my exuberance, she asked, “Why do you ask?” I said, “Well, anytime you meet a girl named Lexi, she’s attractive. If she goes by Alexis though, it could go either way.” That moment of ridiculous and totally unfounded speculation gave me an idea for the next data story: what was the “like” rate on The Grade for certain names?

This story started by trying to see if certain nicknames like Lexi (vs. Alexis), Ali (vs. Aly or Alison), Jenny (vs. Jen or Jennifer), Matt (vs. Matthew), or Dave (vs. David) rendered themselves to being more attractive than other names like Helga, Edna, Ralph, or Prometheus. However, the story evolved. I would never be so bold as to call this story statistically significant in any way, but it did end up striking an emotional chord with a lot of users. And my original speculation (that a girl named Lexi sounded more attractive than a girl named Alexis) was proven right!

Specifically, the story went viral because it incorporated several of the six core principles Berger describes in his book: triggers (a person’s name), emotion (according to Dale Carnegie’s classic book, How to Win Friends and Influence People, your name is the most important sound to you), social currency, and practical value.

We ended up running the “like” rate for as many names as we could find enough data for. Everyone wanted to see how hot their name was. Maybe it gave them an excuse to say something like, “Look, my name is Millhouse—there’s only so much action out there for a guy named Millhouse.” Or, maybe if their name was Millhouse, they could always change it to something like Stone, Brad, Fabio, or Beefcake. Regardless, our PR firm said that story got over 500 million page views! That kind of reaction was more than just viral—more than contagious—it was positively pandemic!

How To Hack Your Way into Large Blogs

As Seen In: Refinery29

There were two publications, Refinery 29 and Elite Daily, with a predominantly female readership that shared a part of our core demographic: singles in their twenties and thirties. Those publications were very engaged with the dating world, but weren’t giving us much coverage, despite the fact that we targeted them heavily.

Finally, one of our brainstorming sessions suggested that we try integrating those publications into a data story. Immediately, we thought to run some data that tried to quantify which blogs had the most attractive readers.

Fortunately, our suspicions were correct; Refinery 29 and Elite Daily had the highest like rates among blog readers on our website, confirming that they had the most attractive readers. We ran with it, and Refinery29, Elite Daily, and every other blog that was mentioned featured the story. 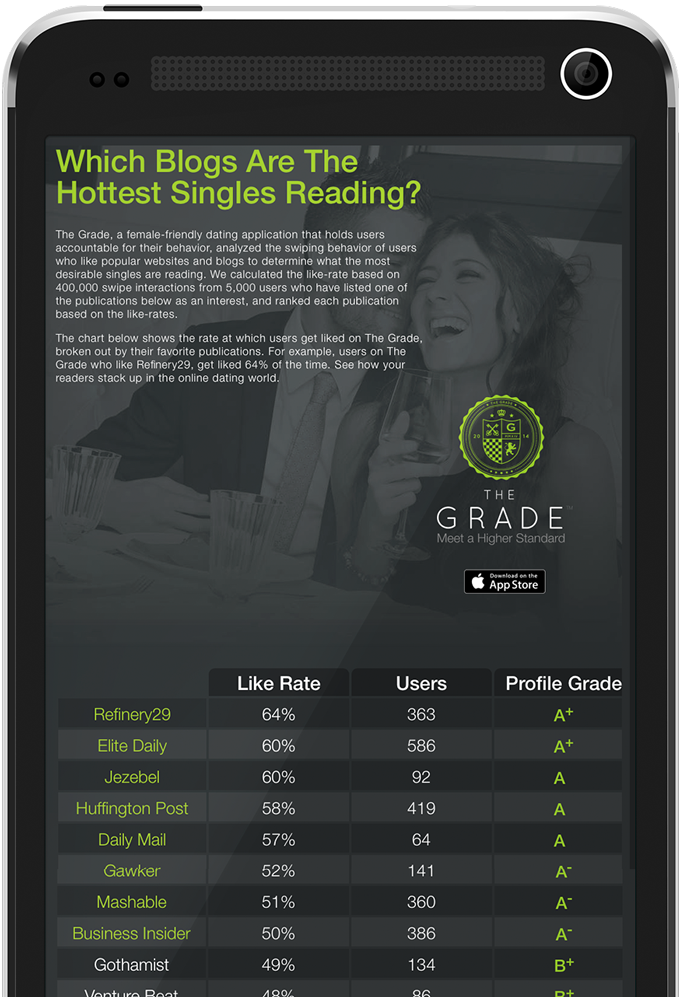 Explosive Growth is now available as an, Audiobook or on Kindle and Paperback on Amazon.